On Folk Politics: Or why the left can't win. 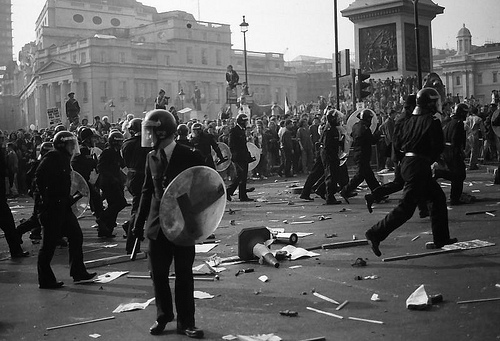 On folk politics - Or, why the left can't win.

"This for the ones who said "Onwards! Comrades! Til' our deaths!" With ruin on their breath, and the weight of centuries on their tongues. Loading failed manifesto's in their guns, as if defeat repeated often enough could some day mean that they had won."

Where did the future go? At this point it is disturbingly clear which side of the political spectrum has successfully staked its claim in the social imaginary to notions of progress, modernisation and technology. So what is to be done?

I'll begin this as is trendy in the style of a man relating to his reader, as if he didn't hold them in the deepest contempt;

For my part I can't even join in the standard lament to be found in pieces like this one that prior to the collapse of authoritarian communism in the Eastern Bloc, at least there existed an alternative to really existing capitalism that could be used to terrify the heads of Western capitalism in only the way that spectres haunting Europe can. I was born on April 16th 1992, five months after the the hammer and sickle had been lowered over the Kremlin for the last time and the USSR was officially dissolved.

No one on the left should shed a tear over that event. The seventy four year long experiment in how to fundamentally misunderstand what Marx was getting at does not deserve to be romanticised, eulogised or looked at as anything other than a fuck up, from beginning to end. The Soviet Union's relationship with it's citizens was sometimes malevolent sometimes incompetent and often both at the same time. The failure of the project and the horrors associated with Red Tsarism and Stalinism in particular have set the project of the left broadly understood i.e. universal emancipation, back in ways that some fear may be irretrievable.

The left for it's part retreated. The social democratic wing embraced the now increasingly ridiculous looking end of history thesis advocated by Francis Fukuyama following the collapse of the Soviet Union. The idea that following the collapse of really existing socialism there where no more grand narratives, ie. Capitalism vs. Communism. Capitalism and therefore markets where the only form of economic and social organisation that worked. The lesson some on the left took is that they ought to focus on measures to make peoples lives better that didn't involve questioning capitalism, and specifically capitalism in its neo-liberal formulation.

As Alex Callinicos, in his role as theorist rather than his role as a diminisher of the seriousness of rape,  puts it thus;

"Many on the left went at least part of the way with Fukuyama. This reflected the fact that they had (like the right) equated the USSR and the other Stalinist regimes with socialism. The fall of what had been up to then ‘existing socialism’ was therefore interpreted as a defeat for the left worldwide."

There are those who never learnt the lessons from the Soviet Union in the first place, they do exist, however small in number - people who are happy to call themselves Leninists or Trotskyists. Those who dance the dance of the past, refusing to believe that the music stopped and that now they just look foolish.

People who attend meetings with other people discussing endlessly revolutionary theory and tactics, convincing themselves, but no one else, that they are the vanguard party who will lead the proletariat beyond the barricades and into the Duma and the Kremlin! These people are like civil war re-creators. Nothing else needs to be said about them, although I will.

Groups like this aren't striving to create a better world. They're striving to recreate some romantic notion of being a revolutionary that they've created for themselves. They may have parties and conferences, they have central committees and all of the things that they believe a communist party should have. Just like the civil war re-enactor has a uniform and a rifle - it's just the rifle fires blanks, it makes a lot of noise and smoke - but at the end of the day everyone goes home and has tea with their family.

There is another group, they are what the late theorist Mark Fisher termed neo-anarchist groups in a lecture entitled 'The Slow Cancellation of the Future'. These are groups such as Occupy, or others in the oeuvre, who in response to the abuses committed by the authoritarian left now refuse to engage in anything that they perceive to be an exercise of power. This idea can seem initially attractive, reject the use of power, prioritise the immediate and the personal over the structural. What Fisher correctly diagnosed however, is that this kind of politics is not politics, it's moralism.

But it's almost worse than that, it's moralism as an attempt to replace the political. It's a moralism that casts attempts to go beyond simply moralising as inherently abusive, in the way that authoritarianism is - it cannot scale itself up to confront injustice on the level of structure. This kind of neo-anarchist moralism is actually, truly conservative in nature. Trapping us in the world we have.

Nick Srnicek and Alex Williams characterise this kind of movement brilliantly in their scathing critique of what they have termed 'folk politics' in their Inventing the Future: Postcapitalism and a World Without Work.

"Against the abstraction and inhumanity of capitalism, folk politics aims to bring politics down to a human scale by emphasising temporal, spatial and conceptual immediacy. At it's heart folk politics is the guiding intuition that immediacy is always better and more authentic, with the corollary being a deep abstraction and mediation. In terms of temporal immediacy, contemporary folk politics typically remains reactive (responding to action typically initiated by corporations and governments, rather than initiating actions), ignores long term strategic goals in favour of tactics (mobilising around single issue politics or emphasising process); prefers practices that are inherently fleeting (such as occupations or temporary autonomous zones); chooses the familiarities of the past over the unknowns of the future (for instance, the repeated dreams of a return to "good" Keynesian capitalism); and expresses itself as a predilection for the voluntarist and the spontaneous over the institutional (as in the romanticising of rioting and insurrection)."

-Srnicek and Williams, Inventing the Future: Postcapitalism and a World Without Work,   Verso, London.


This is movements like Occupy. They are guilty of compounding, accepting and reinforcing capitalist realism, the notion that there is no alternative - they have given up trying to create a better world in favour of creating spaces for themselves to moralise in. They have surrendered the future to the right, and it's time to reclaim it.

Of the three shades of reaction to the collapse of the Soviet Union it is the folk political which is now the biggest threat to the viability of the left achieving its goals. There are those who accepted the end of history narrative and became third-way political actors - think Blair, Clinton and Schröder, they are a spent force. History has given them their day in the sun and they took the opportunity to hollow out the former working class parties, wear the corpses and dance to the beat of the financial markets. But they are now dead along with the parties they killed.

The historical re-enactors where never a serious contender for real social change, they are histories fools. Now it is the neo-anarchists and those who prioritise the local and the personal, who betray themselves as incapable of strategising to improve anything apart from the interior of their yurt, but have also betrayed the future - and those who hope to belong to it.

Neo-liberalism as a political aesthetic, understood as a way of interpreting the world, has been incredibly successful in placing the terms of the social imagination within very fixed limits. It has been very successful at educating people in, and communicating, its ideas. Neo-liberalism should not be understood as a stage of capitalism that arose spontaneously, but is proof if ever it was needed that the future is made by man, the idea that history is steadily advancing irrevocably toward socialism lies dead as the flight of fancy of a man who if he where now alive would laugh at the idea, if he was ever convinced of it to begin with.

Any new world must use the ashes of the old as the mortar. Thus, mercantilist and feudalist social structures and tendencies exist within capitalism. Certain features of capitalism will exist in post-capitalism, and so on - what it does not mean is that we can sit back and wait for it to happen without any input.

Socialism or barbarism, the choice is imminent.

The post-war social planners looked upon a world that had failed, ravaged by the great depression and almost destroyed to defeat fascism and dared to build a future for their children to live in. Their children subsequently failed to extend the same courtesy.

That doesn't mean we should do the same thing. We should look at the possibilities the future holds with wonder, with optimism - automation does not need to mean destitution and poverty, so long as we strategise to ensure automation liberates people from work rather than from resources.

Just as industrial capitalism did not need to mean the ruination of the proletariat, a better world is possible. The time has come to make it inevitable.

I am aware that this can be read as question begging - but I attempt to answer most of these questions in my masters thesis and given that it is currently unfinished I don't want to put it on the internet and have TurnItIn flag me as a (self) plagiarist. Keep your eyes peeled for a part two.

Popular posts from this blog

The Simpsons Gets Political - SE01 E05 - Bart The General

Script synopsis: After defending Lisa from school bully Nelson Muntz, Bart becomes Nelson's latest school bullying target. Sick of the harassment and torment, Bart, Grandpa Simpson, and Herman (a slightly deranged military antique store dealer with a missing arm) rally the town's children into fighting back against Nelson and his cronies. Ultimately forcing Nelson to sign an armistice treaty recognising Bart's right to exist and relinquishing any official power and agreeing to never again raise his fists in anger - only remaining a figure of menace in the neighbourhood.
Issue raised: Just War Theory - which claims that war, whilst generally undesirable, is not always the worst option. Furthermore, certain things can justify going to war and sets certain criteria which must be met in order to claim a war as just.
Traditional just war theory sets certain parameters with which to justify the act of declaring war (Jus ad …
9 comments
Read more

On The Propaganda Model Theory of the Mass Media

April 02, 2017
Straight away my first post breaks one(1) of my rules of writing, given that the impetus for writing this comes from something I read from that denizen of rigour Nick Cohen(2). The focus of the article however will be a sympathetic reconstruction of Edward S. Herman and Noam Chomsky's 'Propaganda Model of Mass Media'. Something which admittedly, I wish had a less tin-foil hat sounding name.

As context is necessary I am going to quote from the article that prompted me to write this and briefly have a bit of a go at Nick Cohen, mainly because I sat through his book Waiting for the Etonians and want my time/money back. Alas, I am forced to settle for having a pop at him on the internet.

The rest should hopefully be transgression free, at least in so far as dem rulezzz' go(3).

I will quote in full the paragraphs I take issue with you to save you from reading the article(4). But first to head something off before it begins. I sympathise with Cohen's broader point in th…
2 comments
Read more